You are here: Home / Career / Reinvention / Burlap to Cashmere

You all know how I love stories of reinvention. Well, I love them even more when I have personal acquaintance with the people involved.

Today’s story is one of reinvention and second chances. It is about a band, Burlap to Cashmere

. If the name sounds familiar you may remember them from their first album, Anybody Out There

which was released in the late 90s. The band had a unique sound, a loyal following and a touring schedule that got the better of them. In 2001 they went on hiatus.

In 2005 guitarist Johnny Philippidis made the news, not for his music but for the beating he took within an inch of his life. Johnny was the victim of a road rage incident in which two ex-Marines and a female accomplice left him for dead just miles from his home in Brooklyn. It was one of those moments in life where you are given a choice. You can continue to play the role of victim or you can choose to revel in the fact you are still alive and recreate.

Johnny was lucky. He had a lot of family and friends surrounding him with love and support. One of which is lead singer and songwriter, Steven Delopoulus,who also happens to be his cousin. No one was sure, including the doctors whether Johnny would ever be able to play guitar again because of the damages he suffered. But Steven would visit him almost every weekend testing out new songs. At some point Johnny found the courage to pick up the guitar and see what happened. Turns out his talent did not need the 13 titanium implants  his face did.

The grandsons of two first generation Greek American brothers decided that it was time to start playing music together again.

Enter, drummer Theodore Pagano at his own crossroads going through a divorce and a subsequent decision to leave his job as an interior designer in London. He provided the organizational skills and drive to land the band another major-label record deal. That album, self titled, Burlap to Cashmere is available today wherever music is sold. 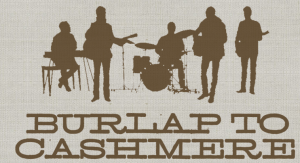 Their sound has a huge 70’s influence that is reminiscent of Cat Stevens, Van Morrison and Simon and Garfunkel spiced with Johnny and Steven’s Mediterranean roots. It’s that sound that is rare today and so badly needed. The kind of music that just makes you want to sit and escape into it, get away from the incessant obsession with where Casey Anthony is and how deep Rupert Murduch’s scandal goes and watch a sunset, drink a glass of wine and surround yourself with people you love.

Now, in full disclosure, I have more than personal acquaintance with this band. Johnny is my cousin by blood which makes his cousin Steven, by Greek standards, my cousin too. Johnny’s grandmother was not just my father’s sister and his grandfather my dad’s best man but my godparents as well. And Steven’s grandparents? I considered them as much my aunt and uncle as any of my blood relations. It is all very tangled in the most Greek of ways. So if I seem biased in how I feel about their music it might be my personal connection.

But I will let you decide that yourself. Here’s is a sample from the new release. And it you like, I invite you not just to buy a copy but to spread the word through Facebook, Twitter or whatever your on line and off line social networks of choice happen to be.