You are here: Home / Career / My Crush on Seth Godin

I have a crush on Seth Godin.

It’s been going on for a while. Since before I launched One Woman’s Eye. A friend suggested I start following him. I was still new to the blogosphere. I’m not even sure I fully understood what a blog was. But I listened and Seth’s blog became the first I ever followed

He’s not my usual type.

A slight man with a bald head who will tell you he rarely watches TV. But that’s the thing about a crush. You surprise yourself with who you’re drawn to.

I signed up to have his blog delivered via email.

I had not yet discovered the wonder of an RSS feed. Each morning I read his words faithfully. I liked what he had to say. He made me think. He inspired me to blog. He seemed to really get the changing business climate. The more I read the more I knew why I had not found him sooner. I was too mired in that changing climate, surrounded by those who did not want to see the truth of what was happening. Seth’s ideas were too radical for them to even think about implementing.

So you can imagine my delight when 15 months into my crush, I got to hear Seth live at the Haft Auditorium for the launch of his new book, Linchpin. It didn’t surprise me much to find Seth waiting as the doors opened to greet his five hundred guests. That’s how Seth is. He makes himself accessible to his Tribe.

I’ve had a lot of crushes.

I admit that sometimes when I have admired from afar, I have been very disappointed when met face to face. Not in the case of Seth Godin. In fact I think I like him more now. Not only is Seth a brilliant writer with an important message to say, he is a dynamic and entertaining speaker.

I didn’t know what a linchpin was.

Turns out it is a small gadget with an important job, to keep the wheels of the car from falling off. His book is about individuals striving to become linchpins in every aspect of their life. It is about the changing work environment, how to thrive in it, and the importance of Art in the process. Yes, Art. You know that word that corporations dismiss. The one that denotes there might be pleasure in the process and pleasure might take away from productivity. Seth suggests it just might add to it.

I am only a few chapters and a two hour talk into Linchpin.

So there might be another blog on this topic soon. In the meantime,  my crush on Seth continues. 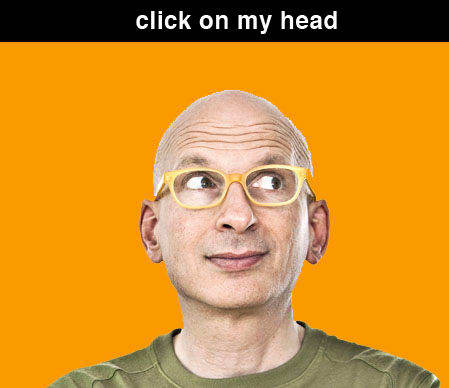