You are here: Home / Uncategorized / The Perfect Red Eggs

Greeks dye their Easter eggs red. It was one of those things that I drew issue with as a kid. I didn’t understand why everyone else got to paint their Easter eggs in pastel pinks and blues and my only choice was red.  So I didn’t get involved. I watched my mom fuss with a big pot of red dye on the stove, trying to get the eggs that deep red that her mother and her father had. But I didn’t pay much attention.

The point of the red is to symbolize the blood of Christ. But the part of the tradition that sticks most with those of us who only know of red eggs is the ritual of cracking them. The way it goes is everyone gets an egg. You turn to the person seated next to you and say Christos Anesti, which in Greek means Christ has risen and you tap the egg of that person who responds with Alithos Anesti, truly he has risen. You keep going around the table until everyone has cracked eggs. It is supposed to be good luck if you are the person with the egg that did not crack.

One of my five dinner guests this year is a non Greek who let me know this was their first ever Greek Easter dinner. It wasn’t until then that it occurred to me I should make an effort that this is a true Greek experience.  Roasted lamb, spanakopita , roasted potatoes with lemon and oregano, koulourakia cookies, and oh, red eggs. I was going to have to dye red eggs. Even though I never have!

So yesterday in the pouring rain I  trekked down Ninth Avenue to the International Grocery, the only place I know for sure would carry red dye after which I headed home to the half dozen eggs I had left in the refrigerator.

Did I mention that I never boil an egg? I’m not a big fan of hard boiled eggs. Yes, I can cook an elaborate dinner, but don’t ask me how to boil an egg, much less dye one red.

I didn’t want to call my mother. I wanted to surprise her knowing she would be happy that there would be red eggs at Easter dinner. But after googling and finding at least a dozen different ways to boil and dye an egg I caved in.

“You only have a half dozen eggs? What if you lose  a few?”


Lose a few?  Where were they going to go? Jump out of the pot? It never occurred to me they could crack while boiling.

“Only one packet of dye? You need at least two to get that rich red color.”

Two? I took a cab instead of the bus to 39th Street and I didn’t think to spring for a second $1.25 packet of dye? What was I thinking?

But this is what happens when I jump into the unknown. I go for it. I don’t think about making mistakes. I don’t account for the what ifs that might go wrong. I just do it. I plan on success.

“Honey, don’t worry. They’ll come out perfect. Everything you do always does.”

Thanks Mom!  Some days I need to hear that more than others. 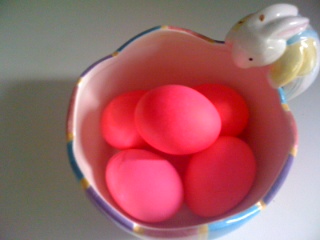 P.S. Only one casualty. More pink, than red. But now I know that cutting corners over the little stuff is not always good business.