You are here: Home / Career / Power Tool #9: Tell Your Story 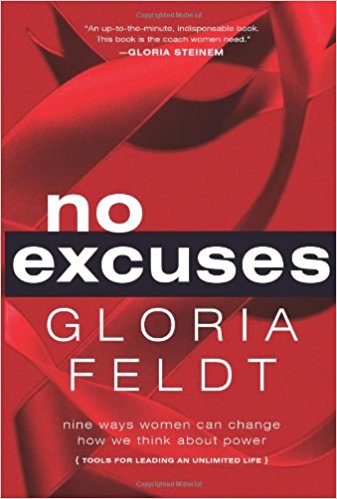 I’ve been in absentia from my blog. There’s always more than one reason that happens, but for today suffice it to say, one of those reasons was that I’ve been reading Gloria Feldt’s new book, No Excuses: 9 Ways Women Can Change How We Think About Power.

This is not the sort of book you are going to race through. This is the kind of book you have to put down and digest before taking more in.

And if Gloria’s passion for what she has made her life’s work has any effect on you, will make you want to do at least one little something differently than you have been.

I’ve been letting it all sink in, reminded of all the work that was done, all the paths that were paved to make me lucky enough to be able to write and publish my own blog from the privacy of my home and say whatever I damn well please without fear of my life in question.

If you think that sounds extreme, you don’t as Gloria points out in Power Tool #1, Know Your History. If you’re like me, you remember how it was starting out.

I graduated high school the year Title IX was passed. Girls took Home Economics and boys took Wood Shop. They changed the dress code sometime in Sophomore year which meant we could ditch the dresses and wear pants to school. I’ve always liked to say that the world I was raised to live in (think Donna Reed and Father Knows Best) was not the one I stepped into as a college graduate.  I’m considered to be of the group of baby boomers that rode into the work force on the end of the second wave of feminism in the seventies.  Doors had been opened for us and we were given the heady task of walking through them.

I wore those horrid suits with shoulder pads that made me look like a line backer with a silk bow tied securely around a high collar. The message was loud and clear that if we were about to make serious inroads in business, we better look and act like the guys and throw the feminine part of feminism out the window.

Many of us, myself included decided to keep our feminist roots quiet. The patriarchal culture we were edging our way into put a negative spin on the movement, co-opting the word feminist to mean you were “one of those angry women” and therefore might not be a team player.

The further entrenched I got in the corporate landscape the more clear it became that if I wanted to get ahead, I had to buy into the program or at least appear to. In other words be seen and not heard unless it was what they wanted to hear. Bonding with the other women was not encouraged. There might be room for one female on the rise, but more than one? Not a chance.

A lot has changed since then, including me but I wholeheartedly agree with Gloria that it’s not nearly enough.

We need to tap Power Tool #7: Create a Movement, and strengthen what was not there when I was on the way up, the sisterhood. There were very few women I could look to as a role model or mentor when I started out. If you were lucky, you crossed paths with a man willing to be your sponsor but their perspective would always be to play the game the way men do. Not as women.

Now there are women in powerful positions who can help the younger ones forge their path. As Gloria points out in her book it’s incumbent for hands to extend in both directions.

While many like to predict the end of the world is on the horizon, I align myself with those who believe all the chaos and change we’re experiencing now is part of a seismic shift, one in which women and the power of the feminine will balance out the patriarchal culture we have been living in for the last two thousand years.  In other words use Tool #5: Carpe the Chaos.

The thing is if we are going to get this planet on the right track, we as women need to tap into our power. Gloria refers to it as the power to as opposed to the power over. I like to think of it as the power within each of us as women, the power that can create positive change.

Gloria’s message is clear. She is a passionate activist and former President and CEO of Planned Parenthood. She speaks from her convictions. She wants to call you to action to do your part and to seize this moment in time. She offers 9 Power Tools from which to choose. Whether you lean left, right or in between, if you are a woman you should read this book. If it sparks controversy for you and it did for me, then use Power Tool #4 and Embrace it  and head on over to her website and engage in the conversation. That’s how change starts.

As for me, reading this book has reminded me of how quiet I have kept my voice for most of my life, that it has taken me this long to own who I am and know that I have something worthwhile to say to the world. Gloria reminded me of the reasons things unfolded as they did and the choice I had in it. She would say I took the safe path and I would agree. But now I’m on another path, one not so safe but much more fun and fulfilling.  It uses Power Tool #9: Tell Your Story.

Author’s note: I originally wrote this post on October 11, 2010.  As I read it back I see it is just as timely today, if not more so when I first read Gloria’s words. Since that time I have watched as Gloria created a movement from the book, Take the Lead Women which will celebrate the inaugural Powertopia Day in NYC and in cities across the country on November 14. I am proud to be hosting a free workshop as part of the Take the Lead Day festivities. More information on how to sign up here.