You are here: Home / Mindfulness / Personal Growth / Where I Was The Day Kennedy Was Shot 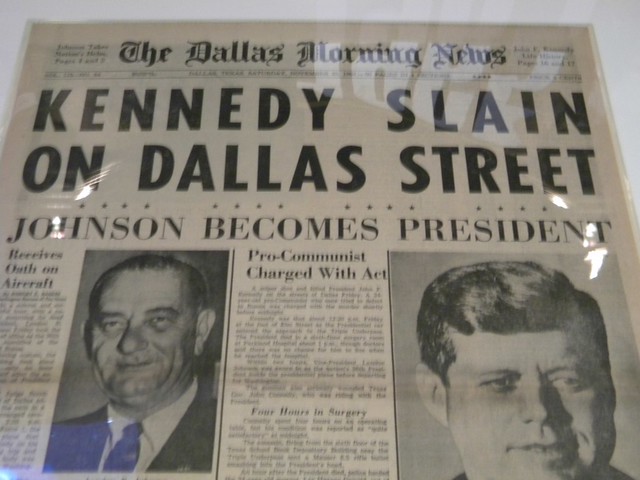 It would be my stage debut in a Friday morning assembly in which my fourth-grade class would perform our play. The premise was that a martian comes to earth and an entire school class goes on a trip to Mars. A far fetched idea in 1963. A man had not yet landed on the Moon much less considered Mars. But a clever and funny idea for a fourth-grade school play at P.S.186.
We were off to rehearse when we were interrupted. The voice came through the PA system. Our principal had an important announcement to make.
I wasn’t happy about waiting. I liked the rehearsals. I liked we got to finish the work part of the day and go to the auditorium where I could practice my lines.
“We must be home before 3 O’Clock!”
I had landed the part of the teacher, most likely because I was the tallest of anyone in the class. But I didn’t care. I had a part. It was exciting. I practiced my lines incessantly.
We all stood behind our desks, our chairs already on top of them, waiting for whatever announcement was so important to interrupt the flow of our day. Announcements were reserved for the morning after the Pledge of Allegiance, not for the afternoon.
Then we heard the voice of our principal, Mr. Poliakoff.  He said something terrible had happened and we were being sent home.

“The President has been shot.”

But that couldn’t be! He had to be wrong. Presidents didn’t get shot. Not in America. Yes, I knew Lincoln had been shot, but that was something for a more barbaric time. Not now. Not in modern day America.
He told us we were to go directly home and we were to stay there. Mr. Poliakoff emphasized directly. We were not to stop anywhere.

No one said a word.

Including Mrs. Axelrod, a petite, slim woman who wore high heels and silk stockings with seams that always stayed straight.
Mrs. Axelrod was different than the other teachers in the school. She seemed to really like her job and her students. She dressed more fashionably,  favoring straight skirts and silk blouses that always managed to stay tucked in. And she smiled. A lot.
Except for now. Now she wasn’t smiling. It reinforced what we had heard the Principal say. Something terrible had happened. Something unfathomable.
I watched her wipe away a tear from behind her cat eye glasses before she gathered herself and told us to line up in size place order and get ready to leave.
The quiet with which we were ushered into the halls, down the stairs, and out of the school was eerie. The kind of quiet I  would experience years later as an adult on September 11, 2001 walking up Sixth Avenue among herds of people. Faces numb. In shock. Not wanting to believe.
I found my little brother waiting for me outside of the red brick building that stood at the corner of Little Neck Parkway and 72nd Avenue. He had that look that everyone had. Scared. Something bad was going on and it was more than any of us understood how to process.

We didn’t walk home. We ran.

Along with all the other kids in the neighborhood. In and out of the complex of two-story garden apartments that made up Glen Oaks Village, a haven for a post-war generation raising their kids. No one really sure what had happened or the enormity of the event that would shape all of our lives.
Mom was waiting for us. At the door. As were all the other mother’s in our court. They all had that same look – one I had never seen on an adult before.
Fear. Real fear.

They were trying to hold it together

To be strong. This generation that had lived through WWll, the war that was supposed to end all wars, was now faced with the news that the President had been shot. The young, handsome President with the beautiful young family who was supposed to represent Camelot. Shot. In our own country. On our own soil.
The television was on when I walked in the living room. It was never on when I came home.  And it stayed on.

I’ll never forget the look on my father’s face when he walked in the door. The big man with the enormous smile and hearty laugh never looked so serious. He headed for his chair and sat in front of the polished blonde wood of the big Crosley television console that was the centerpiece of our living room, moving only to empty the ashtray overflowing with cigarettes or fill his glass of scotch.
I sat next to my father on the floor – watching. It made me feel safer. I kept looking up at him for some reassurance that it would be okay. We would all be okay. But I don’t remember getting it or even if it was there to give.
What I do remember most about that day and the ones that followed was that television. It was the first time it was on non-stop and the first time I was glued to it.
When my mother decided I had watched enough for one day my father told her to let me be.
My mother wanted to protect me from the hours of televised coverage and my father wanted me to feel it.

We were watching history. But we were living it too.

November 22, 1963, signaled the beginning of a turbulent time in this nation’s history in which there would be riots, more shootings, and a daily death toll scrolled on the evening news – lest we might forget there was a war going on in Vietnam.

It was the first time in our nation’s history that television held our collective hands through a tragedy. In many ways, a glimmer of the digital age was set in motion.

It was a day that fifty years later I can still remember in minute detail and when I allow myself – still evoke fresh emotions. It defined the rest of my youth. It was my first brush with the undeniable. Bad things can happen in the world. And sometimes there is nothing we can do to stop them.