You are here: Home / Personal Growth / Inspiration / I Had A Dream

I had a dream that one day I would no longer work for someone else. In that dream I imagined being more generous and benevolent to myself when it came to things like taking days off. I imagined that I would be able to shut off my work brain in much the same manner I had learned to do when I had my corporate job, letting it rest just long enough to refresh itself before the wheels started turning again.

Turns out that part of my dream isn’t so true. The wheels never stop, government holiday or not.

They don’t necessarily take a break on the weekends either. In fact, it is not that rare an event where I get my best work done on a Sunday. This is not to say I now work 24/7. I don’t.  But I will own up to the fact that it is often a Tuesday or Thursday when I get the least amount of work done. It’s just what happens when you work independently.

Some days you are up before the sun and others find yourself in your pajamas at noon. Some days you are planning and in my case always writing….sometimes at 11PM, and others you are hard pressed to check two things off your to-do list.  Somedays it is back to life before you left the corporate world like tomorrow, when I have a networking lunch that will involve wearing stockings and heels. It’s just what happens when you are your own boss. It’s something you learn to relax into but always struggle with. Especially if like me you spent A LOT of years working for “the man.”

I had plans to be generous to me and to sleep in today. Mostly because for some reason that I will not even try to explain, I was up before the sun on Saturday and Sunday and consequently had a very productive weekend. But the jackhammers on the construction site next door to my building had other ideas. They started working at 7AM as they have been for months. Apparently, whatever union they work for doesn’t know that Martin Luther King’s Birthday is now a federal holiday. Or perhaps they are just happy to be getting time and a half.

I have learned that the dream as Martin Luther King so eloquently demonstrated is the vision. What manifests doesn’t always necessarily look exactly as the picture you had in mind, and that is okay. It’s a first step. The key is to keep dreaming and to keep dreaming big.

As for me, I have decided to work until Noon today and then play this afternoon, or what I like to think of  as the best of both worlds. 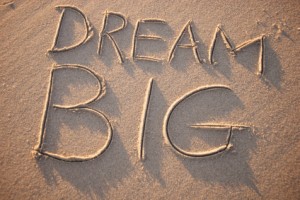