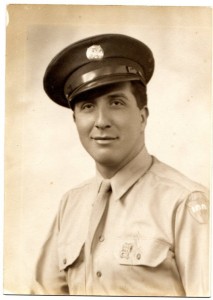 It’s hard not to think of my father on Memorial Day. He served in the 34th Division of the 133rd Infantry during WWII, inducted into the Army on December 3, 1942 and honorably discharged on November 9, 1945. He managed, unlike many of his army “buddies” and friends, to survive his time in active combat with only a shrapnel wound that got him a Purple Heart. But the internal scars of the time he spent in Africa and Italy never left him.

Like much of his generation he did not like to talk much about “The War”. He would wake himself up from his nightmares yelling, his words not clear but without a doubt frightened.  I wanted to ask, what was it like, what did you see that has not left you? But my mother, as if anticipating my questions, would just look at me and whisper, her finger over her lips, “It’s from The War.”

I learned more about that time after he died. My Aunt Jean gave my mother an old cardboard box, stuffed to  overflowing with all the letters my grandmother had saved that he had written home during that war. The letters were intended to make Nana feel better, to keep her protected from what he was witnessing and engaging in and to assure her and the rest of the family he was safe and would be home soon.
But behind the words he wrote, in between the ones that had been cut out with a sharp edge by the censors, in case they got into the hands of the enemy, I learned of the young, carefree, idealistic, twenty year old man my father had been when he was called to duty. In those letters I saw the boy grow up more quickly than he had intended or wanted to.

My father was never a supporter of the Vietnam War, but he was always a supporter of the troops. His time overseas taught him that war, anyway you looked at it, was not a good thing and something to avoid. But he supported, unwaveringly the people who put their lives on the line so we can enjoy the freedoms we do.

I believe he would feel the same way today. No matter what his feelings might be about the wars we engage in, he would support the troops and he would be concerned with what their lives would be like if and when they are lucky enough to return home.

My father kept his internal wounds to himself. That was how his generation dealt with their horrors.

But I know if James John Tombrakos knew there was a better way he would be supporting it. He would be behind organizations like ReMind.org whose support goes beyond the physical to the psychological wounds of war. Dad, always my hero, would be asking how we are giving thanks for those who gave their lives so we can live ours. And he would want to know what our government is doing to support the soldiers who do get to come home.  And if it’s enough.