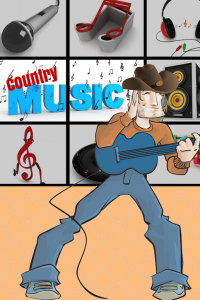 I had only been in the radio business six months when the new owners of WXTU decided to flip the format to country music. The first song they played was Waylon Jennings, “Are You Ready For The Country.”

I don’t remember much else about that day, except I knew I wasn’t ready. I wanted to run out of that station on City Line Avenue in Bala Cynwyd and go hide. I couldn’t  imagine that anyone was going to listen to country music in a market like Philadelphia. The station, as far as I could see, was doomed and my new career with it. It was unfathomable to me that I would be able to sell enough commercial time to cover my minuscule weekly draw, much less pay my rent. It all looked very bleak.

I wasn’t the only person who questioned this move. The trades were full of skeptics. There was nothing cool about country music if you lived in the Northeast in 1984. That was music people listened to who drove pick up trucks and who didn’t live in big cities.

The only person who truly believed it would be a success was the man who made the decision, the owner of the station, George Beasley.

As it turned out, George was right and everyone else was wrong. It also turned out to be one of the best things that could happen for my career.

I got to learn more in the five years I spent there than I ever would have selling a format that was more stable and mainstream. I learned  – about radio, about advertising, about selling, about growing a business from the ground up – enough to fill a book. And here’s the real bonus that I have only understood in hindsight. I was also learning valuable lessons in digital marketing.

Yes – you read that right. There was no privatized Internet in the eighties. We were still living in an analog world complete with pay phones and assistants who took handwritten messages on paper that read “While You Were Out.”

Yet I was learning the basic tenets of digital marketing.

I just didn’t know it yet.

1- The Importance of a Tribe.  We didn’t call them tribes in 1984. We called them listeners. If our listeners liked what we served we had a product. And if they were passionate about that product we had a following that would translate into ratings which meant advertising dollars which resulted in a business.

My skeptical self learned within a few months that country music radio fans are no ordinary fans. They are fiercely loyal and passionate about the music and the artists. They supported our advertisers because the advertisers supported their music. They validated our product. Which brings me to the second lesson I learned.

2- Niche markets can create successful and viable businesses. WXTU lived on the tail of what Chris Anderson would later coin long tail marketing. Most broadcasters at that time were looking to deliver a format that appealed to the masses, one that would land them as a Top 5 station simply because very few radio media buys ever included more than five stations on it. Being at the top of the list – or the head of the tail – was the fastest way to make the most money.  What I learned from WXTU was that a strong, niche product with a loyal tribe might not make the most money – but it was clearly a viable business – especially when that tribe was engaged.

3- The Importance of an Engaged Customer. There are many in the radio business today who tout terrestrial radio as being the original “social media.” There is validity to that statement. The best on-air radio personalities have always enrolled listeners in personal conversations and promoted engagement in station contests and events. Before the Internet, the telephone and write-ins enabled that interaction.

Country music fans have always been more engaged than the average radio listener. They spent more time with the station. This was not just music they liked to listen to – this was a radio station they loved feeling connected to.

That kind of engaged tribe is what every digital marketer seeks today.

4- Data is nothing without the context of story.  Radio stations have always lived and died by data in the form of  ratings (in 1984 it was Arbitron – today that is owned by Nielsen Audio). Ratings are evidence of listenership and how you get to price your commercials.

Even though WXTU presented a viable, niche format, its reach was not enough to be a top five contender – which meant ratings taken at face value would never get us on an agency buy.

So we learned to look for the story within the data – which in this case was that our listeners stayed with us for longer periods of time and thus were more actively engaged. That active engagement meant they were more likely to be listening when a commercial did air. In other words they were not tuning out – a challenge that is compounded in today’s digital environment with its deluge of choices.

5- Be Agile. Radio stations are essentially selling air. Which means there is no shelf life for your product. If that morning drive spot is not sold today, you can’t add it on tomorrow and sell it then. So you learn to move fast and be agile. If something in the news happened that warranted a change in the playlist – just like that – within minutes – the music could change. If  someone wanted to get a commercial on that afternoon we could make it happen. Agility wasn’t an option when you’re selling a station that is not a “must” buy, it’s just a way of being.

The ability to be agile, to be able to move quickly at the same time we are thinking things through is necessary in the world of real-time marketing. I’m fortunate to have learned that long before it became trendy.

6- Dare to be Different. The tendency of most business is to chase the trends. To look for where you can make the most money in the shortest amount of time and to choose the safest route to make that happen. George Beasley thought otherwise. He saw a hole in the market, believed he could make it work, and followed his instincts – despite the naysayers. He wasn’t afraid to fail. And as it turns out he didn’t. The station, while recently traded to CBS, is still alive and kicking in 2014.