Shauna Mei is the CEO and Founder of ahalife, a  new and innovative on line shopping concept. I had the pleasure of hearing Shauna speak at a recent 85Broads breakfast held at The 21 Club.


Shauna Mei’s story caught me off guard. My first glimpse had me writing my own version. She was strikingly attractive, well dressed with what I consider enviable glossy and straight Asian hair. Her poise walking to the podium in the upstairs dining room of the 21 Club suggested she had been raised by affluent and caring parents in a well provided for environment. Since she was speaking to a group of 85Broads women there was no doubt in my mind that she was also smart so learning she was a MIT graduate was hardly a surprise.  It never occurred to me that her journey had any challenges or that at the young age of 26 she was already a seasoned reinventor. Seriously, at 26, how much reinvention has there been time for yet ?

It turns out I was completely wrong. Shauna has been reinventing herself and the way things are done since birth.

She was born in Inner Mongolia in China to a culture that believes it is better to give birth to boys than girls. Her mother was advised to terminate the pregnancy for two reasons. Shauna was a girl and she had a hole in her heart. Fortunately for all of us, her mother stood up to the social convention and community telling her otherwise and brought Shauna into the world.

A series of circumstances allowed the family to immigrate to the United States around the time of the Tiananmen Square Massacre. In 1990 at the age of 6, Shauna was on her second reinvention.

Shauna’s first job after graduating MIT was at Goldman Sachs where she quickly became a rising star. Her work in the retail sector introduced her to many influential people in the fashion industry, one of whom was Jeffry Aronsson who she would later launch the Aronsson Group with. Three years later she was Stockholm bound as CEO of the Casall group. For many the lack of daylight in Sweden might not prove inspirational. Yet it was during this time that the light first sparked for Ahalife.

Now as I said Shauna is smart. She is also wise. She believes in women supporting women and is savvy enough to know to ask for that support when needed. Once back in the states, the first person she went to with the idea was Janet Hanson, founder of 85Broads. Not only did she get advice and encouragement, she also got one of her investors. 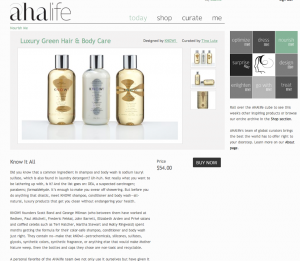 Ahalife combines on line shopping with social networking. They look for unique products that inspire and feature one each day to its members along with the story behind it. They also invite their members to participate in the selection as a curator. I for one, find this refreshing.

I am, always have been and always will be a shopper. I’ve made a sport out of searching for what you don’t see a lot of. Which used to be much easier before every store known to peoplekind had a location in every city imaginable. I miss the days when you could find those little shops that did not carry a lot of any one thing but a little of something that really stood out and could purchase not just an item, but something with a story behind it. Ahalife brings that joy right to your desktop.

And about that hole in her heart? It disappeared. When in the United States and finally able to get the medical care to repair it, Shauna’s parents were able to schedule the surgery she needed. But once on the operating table the doctors were no longer able to find it.

Shauna told us her life has always been about believing. Her advice to others launching new ideas?
Ignore the market. If you believe in it. Go for it. Identify your failures quickly and move on. Momentum is everything. There is no time to not believe in yourself. Fake it until you make it.

A lot of wisdom for one so young. A lot to take in at a breakfast meeting. I was both moved and inspired and yes  brought to tears many times. But as a good friend of mine always says, tears mean you are on to something good. And I do believe Shauna Mei and ahalife are on to something very good.

For more about ahalife or to request an invitation to join please visit www.ahalife.com