You are here: Home / Business Advice / The Day I Left The Building For The Last Time

There are moments in your life that no matter how long ago they’re behind you, the memory is always fresh, the details vivid. That’s how it is when I think of the day I was told that my job was being eliminated. 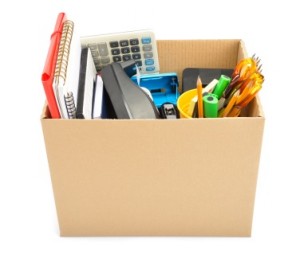 I knew something was different before I walked into the lobby of the building I had worked in for eleven years. Even though it was a Monday and people are rarely let go on Mondays, I knew this was the day I would be served my divorce papers in the same way I knew driving to the hospital on September 27, 1986 that my father was already dead.

The rumors had been flying for weeks. Cutbacks. Layoffs. Business was bad. Plus I have a good intuition about these things. A colleague once nicknamed me Nostradamus. I knew my situation. I knew I was a target.

So I wasn’t surprised when my boss stopped into my office and after asking how my weekend was asked if I had a few minutes to talk in his.  I was less surprised to see HR waiting, a pink folder in hand, with my name written in neat black type on the side. I listened as the prepared speech from the company lawyers was recited. I glanced at the papers and asked how long before I had to leave.

I had been on the other side of the desk more than once in my career. I knew the nausea and the lack of sleep that preceded having to let someone go even when you know it is the right thing.

It wasn’t any easier hearing it. In fact, it was almost surreal. This time it was me.

I floated through the next hours as if someone had taken over my body. There was a combination of relief that what I knew was going to happen had finally occurred and disbelief that it was now reality. They had said I could stay as long as I wanted – but I had to be out by the end of the day. That’s corporate speak for we’re trying to be nice adults – but not that nice. I’m still not sure what made me linger. But I did.

I walked the corridors and told the people who I wanted to that I was leaving. They looked terrified. I knew it wasn’t about me. It was about the truth of what it meant. It could just as easily be them one day. That’s how corporations work. One day you’re a valued employee. The next day you’re an expense cut.

They wanted to know what they would do without me. I’d been in the corporate world long enough to tell them the truth. They would forget. They would go on. That’s how it works.

I still remember standing on the sidewalk outside of the building on that hot July afternoon waiting for a cab. A colleague held the white cardboard file box filled with my personal belongings, the ceramic coffee mug with Goddess printed in purple and a green hanging file with my collection of praise for all I had done right. My pass key and company ID had been turned in.

I think that’s when the numbness started to wear off.

I was leaving the building – for the last time.

I had no idea what tomorrow would look like. And I had barely shed a tear. Not yet. Not until I got into that taxi.

That was five years ago yesterday.

My story is not unique. It happens every day in a corporate office near you. It’s the ugly part of big business. No one ever believes it will happen to them. Until it does.