You are here: Home / Mindfulness / Personal Growth / Inspiration / Why I Vote Every Chance I Get And You Should Too 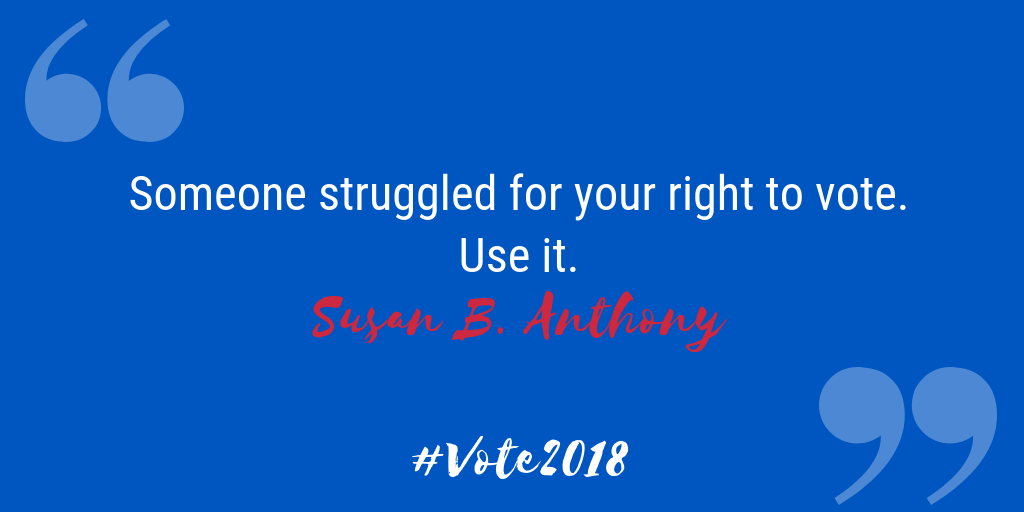 My birthday falls just two weeks after Election Day so the very first election I wanted to vote in I couldn’t because I wasn’t 18 yet. That was 1972 and my candidate, George McGovern lost to Richard Nixon, someone who resigned in disgrace less than two years later in August 1974. I supposed you could say that even at a young age, I could spot dishonesty and deceit a mile away.

I promised myself I would vote in every election I could. With the exception of a few here and there I have kept that promise. I have voted in the two states I’ve lived in and the District of Columbia. I have voted in General Elections, Midterms and Primaries and I will vote again this Tuesday.

Voting is my right.

I vote because I am a woman.

We like to believe that this country was founded on free and equal, but it’s not exactly true. Men of color were not allowed to vote until 1870 when the Fifteenth Amendment was passed.  And women – well women did not win the right to vote until the Nineteenth Amendment was passed in 1920. That is less than one hundred years ago which means that when my grandmothers arrived on these shores as young immigrants from Greece in search of a better life, achieving citizenship did not mean they got the right to vote along with it. I vote for the women who came before me and those who will come after me.

This year I am also voting because I am angry.

I don’t get angry often, but when I do I make up for lost time. This year I am as angry as I have ever been. I am angry at a Congress that out of 535 members is 80% male and is creating legislation that does not benefit women’s rights, is dismissive of women in general and is not fulfilling their checks and balances responsibility to keep the Trump administration accountable. I am angry at an administration that is undermining environmental regulations that protect clean water and clean air in favor of profits, trying to dismantle public education and social security, locking children in cages, suppressing voter turnout, lying every hour on the hour and slowly but surely lining their own pockets instead of putting the country first.

I could go on, but that gets me nowhere. What does help is doing something to try and change it – like voting this Tuesday and choosing the candidates whose values most closely align with mine.

Apathy is an unattractive quality

I’ve never quite understood why people can vote for their favorite couple on Dancing With the Stars but can’t  bring themselves to get to the polls. It’s true that it’s a lot easier to vote for a contestant on a reality TV show than some states make it, but still – this is your life. This is about your rights today and tomorrow as a citizen of the United States.  Apathy in general is something I do not like, but voter apathy is something I disdain.

There are a lot of people who think their vote does not count but they are sadly mistaken. Trump likes to go on about the number of electoral votes he got, but the reality is it was effectively 107,000 votes between Michigan, Wisconsin and Pennsylvania that gave him the electoral votes to win in 2016.  I won’t go into what an antiquated system that is, but it is living proof that your vote really does make a difference.

Voting is the most patriotic thing you can do

If as Abraham Lincoln said in the Gettysburg Address, this is “a government of the people, for the people and by the people,” the people have to do their part. So vote this Tuesday. Vote as if democracy depends on it, because it does.